Dr. Wilson brings a unique perspective to the democratic race. 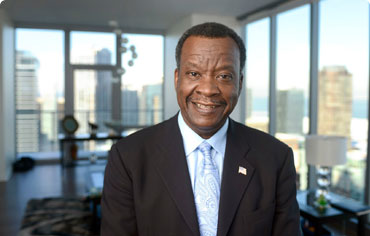 From earning 20 cents a day to owning a multimillion-dollar company, he knows firsthand what it takes to be successful.

Click the link below to learn about his story.

Dr Willie Wilson was born in Gilbert, Louisiana, to wretched poverty. His early education was extremely limited, and he quit school after the 8th grade. At one time, he lived in a work camp in Florida, and as an African-American man, reports that the conditions there were comparable to slavery. Fed up, he literally fled the camp, pursued by guard dogs as he ran.

One fateful day, while working as a janitor in a Mcdonald's restaurant for $2 per hour (in the 1970's), Wilson was asked to temporarily manage the store when most of his disgruntled coworkers walked off the job. He accepted, and his performance was so exemplary that he was invited to keep his new role. Later, lacking both money and academic credentials but gifted with charisma, he managed to meet with Mcdonald's founder Ray Kroc, whom he impressed enough to win approval to open his own franchise. In this, Wilson truly excelled, eventually coming to own several Mcdonald's stores and even expanding into other industries. From utter destitution, he rose to become a successful entrepreneur and a wealthy man.

Using some of his new-found resources to advance his long neglected education, Wilson now holds a Doctor of Divinity Degree from Mt Carmel Theological Seminary, a Doctor of Humane Letters Degree from Chicago Baptist Institute International, and a Doctorate in Humanitarianism from the Denver Institute of Urban Studies and Adult College. He has also been awarded an honorary Doctorate in Humanitarianism from Swisher Bible College.

Living in Chicago, Dr Wilson made the decision to run for Mayor of the Windy City. Despite being virtually unknown in the world of politics, his charisma and skillful campaign management won him over 11% of the vote and a third place finish, enough to attract notoriety in the local press. Encouraged by this result, he is now seeking the Democratic nomination for President in 2016.

Politically, Wilson espouses decidedly liberal social ideas. He criticizes the United States' frequent involvement in overseas wars and what he calls “religion wars”, and argues that the nation's resources would be better spent providing free education to citizens at home. He speaks of ending social divisions between Republicans and Democrats, citizens and police, and Whites versus Blacks, among others. His impassioned messages are likely to find a receptive audience among the left – but his candidacy is a definite longshot.