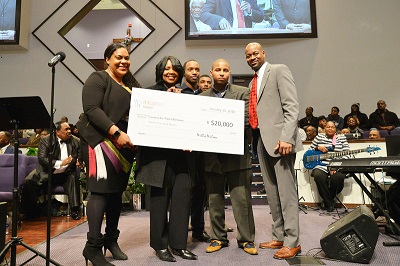 When humanitarian business icon Dr. Willie Wilson gave away $200,000 on Dr. King’s birthday, he included a $20,000 check to a group of former Cook County Jail detainees looking for a second chance on life.

Joy came on the morning of Dr. King’s 89th birthday anniversary for the Centers for New Horizons, a non-profit social service agency that helps adults especially those with backgrounds become self-reliant and a productive member of society.

Dr. Wilson said, “We’re going to help them out because they want to go into business.” There are about 22 men looking for a second chance that will be mentored by the New Horizon organization. According to Wilson, the men will wash cars and cut lawns for starters. They want to start their own company just like Dr. Wilson did years ago when he began mopping McDonald floors and ended up owning five restaurants before opening up Omar Medical Supplies and Singsation aired over WGN-TV.

“We offer hope for these guys, confidence to help them move through our workforce program. We are their second chance. Sometimes it is their first shot at getting their first job,” said Hamilton. Program participants are as young as 18 and as old as 30.

When asked her reaction to Dr. Wilson’s $20,000 gift, Hamilton said, “It is amazing. We get a lot of federal, county, local, state and city funding but what makes Dr. Wilson’s gift more unique is that he gives his time with the young men. For us that makes a difference. There are many service gaps in our program and Dr. Wilson filled one of those key gaps.”

Hundreds of people were lined up at the church waiting to get money for their utility bills, but some of them, thanks to Facebook, came just trying to get over. Retired Illinois Senator Rickey Hendon and campaign consultant, said, “I saw every bill in the world today, and even when the people were not right, Dr. Wilson still gave them money.” Of those who came looking for money under false pretenses, Wilson said, “Some people unfortunately will try to pimp and take advantage of a good man’s heart. Yes, it bothered me, but Dr. Wilson gave him money anyway.”

One of the ministers, Pastor Ira Acree, who heads the Greater St. John Baptist Church, said, “It’s a blessing to be here on Dr. King’s birthday celebrating with one of the greatest philanthropist, Dr. Willie Wilson.“ “Dr. Wilson is fighting for prison reform, excellence, equitable education for everyone and for jobs. We’re blessed to have somebody like him who cares about the people just like Dr. King, just like Jesus. It’s unbelievable. I don’t know anybody else who would do this,” said Acree.

Bob Fioretti, who is running for Cook County Board president said, “Dr. Wilson is a true person. He’s got the integrity, the confidence and the compassion to give back to the community. He knows whatever he receives, he gives back. He is a model citizen for everyone and an inspiration for all.”