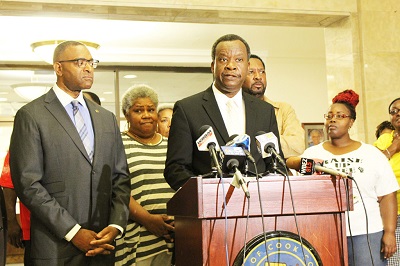 A number of leaders recently endorsed a proposed bill crafted by former mayoral candidate Dr. Willie Wilson that will help more homeowners who can’t pay their property taxes remain in their homes.

At a City Hall press conference held last Thursday, Wilson, who was joined by Cook County Commissioner Richard Boykin, a number of ministers and one of the 226 recipients of Wilson’s recent property tax giveaway, said Boykin will introduce the bill on September 13.

Over the past year, Dr. Wilson said he spent more than $250,000 of his personal funds helping Cook County homeowners pay their tax bill sometimes due to loss of jobs, divorce, medical reasons or are on fixed incomes.

In introducing his proposed Property Tax Hardship Relief bill, Dr. Wilson said, “It will prevent anyone from your past tax due bill and charging a higher interest rate to get their homes back.

“This is a moral issue here….” Wilson urged people to call Cook County at 312.603-6400 and ask the commissioners to support his bill. There are too many taxes going on today. You cannot tax people out of their homes. How can you tax people who don’t have money to pay taxes? That doesn’t make any sense,” said Wilson.

One of the 226 recipients of Dr. Wilson’s recent property tax gift of $300 was Linda Townsend. “I am a recipient of his generosity, and I think this bill would be a good thing for a lot of people who are losing their homes or having hardships,” she told reporters.

Boykin said, “Rising property taxes, rising taxes in terms of a bad tax, sewer and water taxes, a bottle water tax, a sweetened beverage tax, a 32 percent increase in the personal income with the state, a sales tax on gasoline in the state…all of these taxes have come to create a perfect storm.”

Boykin said these taxes have caused “a real hardship for many of our homeowners here in Cook County. It is important that we have public/private partnerships to assist citizens in the county from losing their most treasured assets…their homes.

However, Boykin said, “It is important for us to have a permanent loan fund for individuals backed by Cook County.” He said this is the right thing to do because many properties have been either over valued or over assessed.

“Homes in poorer zip codes were rated higher in terms of assessed values than homes in wealthier zip codes,” Boykin said. He called Cook County Board President’s idea of conducting a study of these assessments “tired, stale and old.”

“My answer is we should get behind this loan fund and make sure individuals don’t have their homes sold from under them if they suffer a hardship. We will work with banks, private donors and generate the necessary amount of money for this loan fund to help struggling property owners in Cook County meet their property taxes which I think are way too high,” said Boykin.

He called for rebates for those homeowners whose homes are over assessed or over valued in poor zip codes. “They deserve a break. They’ve been paying the lion share of the load for a long time, and it is time for us to stand up for them,” Boykin said explaining the bill won’t cost the county a dime.

“The county’s finances are in shambles, according to Preckwinkle,” said Boykin. “It took one judge’s temporary restraining order to lead to her asking 1,100 people to be laid off from county government. This program will pay for itself,” Boykin said. He will introduce the bill on September 13 and urged his colleagues to support the hardship loan legislation.

Pastor Robert Patterson, head of the Spirit of Truth MBC, and president of the Baptist Pastors Conference of Chicago & Vicinity, also approved Dr. Wilson’s proposed bill. “We have our seniors and most of us who are young have parents.

“It’s a shame when they get old and retired they lose their home. They have nowhere else to go. Sometimes they have children who will not help and support them. I think this bill is a wonderful thing to help them stay in their homes,” said Patterson.

Rev. Dr. Marshall Hatch, pastor of Mount Pilgrim Church and the Leaders Network, “This is not just a legal issue, but it is a moral issue,” he said referring to many poor homeowners losing their homes due to the rising property taxes. “We need to look at public policy through a moral lens whether or not this city will be a place where poor people live.”

Hatch said the bill will “give an opportunity for the blessed of us to help the rest of us.” The bill will help homeowners stay in their homes something he said, “is what you call good morality.”

In explaining the bill, Boykin said the county would back the loans. “You have to have some equity in your home and the Treasurer and assessor would work with homeowners to make sure equity is there.

“You are also eligible if you are on a fixed income and you’re getting a Social Security check or some other form of public assistance,” explained Boykin. “It won’t cost the county taxpayers any money because we’re going to raise the money for this program.”

Agreeing with Dr. Hatch, Boykin said this is a moral issue. “There have been too many homeowners who owed less than $1,000 on their property taxes who had their taxes sold to the tax buyers…. We can get it done if there is a will….” Boykin said these tax buyers get 18 percent on buying the taxes and having homeowners redeem. He called this “highway robbery.”

Asked by this reporter if homes that have been over assessed will be reassessed, Boykin said, “The assessor’s office has not agreed to do that…. I encourage people to appeal those property tax bills.”

“One of the things I think is shameful in the county is that you don’t need a lawyer to appeal your property taxes, but if you’re a business, you have to hire a lawyer to appeal before the Board of Review. That should be changed.

“Those lawyers get a cut of what- ever the savings are and in many instances, over 80 percent, you get a savings. They (the taxes) get lowered,” Boykin explained.

Dr. Wilson said the county should not charge any interest rate charged on poor homeowners. “They have already paid because their property has been overassessed. The burden should be put back on the county and not the homeowners.”

Boykin said under this legislation, he will be meeting with banks “that were the most egregious actors in terms of predatory lending. They have a unique role to play in terms of giving back to the community,” he said referring to Wells Fargo, Chase, Bank of America and others involved in foreclosing homes. “It’s right to make sure that people stay in their homes.

“When people are forced to leave their homes because they have been bought by taxbuyers, it leaves a hole in the community…, That puts a burden on other homeowners in the neighborhood,” said Boykin. “Poor people have been paying more for their taxes than wealthier people.”